The Fictitious Domain Methods are generally used to numerically solve a problem, that is initially defined in a geometrically complex domain, in a bigger and geometrically simpler domain. A FDM often involves the imposition of a boundary condition (bc) no longer on an external boundary of the domain but on an « immersed boundary ».

The FDM I have used is based on the Lagrange Multiplier Fictitious Domain Method [1] (see also [2]). The « immersed boundary » is discretized by a set of control points on which a given Dirichlet bc is enforced at a cost of a local modification of the discretized equations (see [3] for more details).

An illustrative example with the Poisson’s equation

We consider the following problem :

At least two possibilities exist to numerically solve the problem : use the « standard » Finite Element Method (FEM) or use the Fictitious Domain Method (FDM).

We consider now the viscous flow around a rotating rigid cylinder placed near a moving wall. This problem has an exact solution in the 2D Stokes regime [4]. 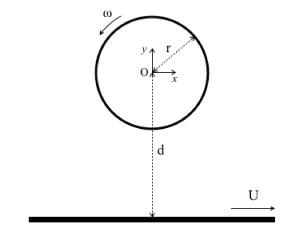 The Fictitious Domain Methods can also be used to couple two solvers using two different spatial discretizations. This approach is sometimes referred to as a coupling via a non-matching interface method.
I use the FDM to couple a solid Lagrangian solver to a Stokes Eulerian solver, in the context of geodynamic modeling. The method is described here .